Confucius Institute at Unicamp held this Thursday (31) its annual meeting of the Council, for the year 2021. The meeting was set to discuss the Institute’s performance and prospects for its next actions in the promotion of Chinese language and culture and in the deepening of the academic collaboration between Unicamp and its partner in China, Beijing Jiaotong University (BJTU), as well as other Chinese institutions. The meeting was marked by the inclusion as members of the Council of the Dean of Unicamp, Antonio José de Almeida Meirelles, the Executive Director of International Relations, Oswaldir Taranto, and the Advisor to the Executive Board of International Relations (DERI), Rafael Dias, and the adhesion of Unicamp to the “Global University Alliance for Sustainable Transportation (GAUST)”, alliance under construction for research and development in sustainable transport.

The Dean of Unicamp and the President of BJTU, Wang Jiaqiong, praised and thanked the work and stressed their commitment to stimulate cooperation carried out by both institutions, in line with the 17 UN Sustainable Development Goals.

For Bruno De Conti, Brazilian Director of Confucius Institute since 2017 alongside Gao Qinxiang, Chinese director, the year was one of great challenges, but also of achievements. “Evidently, the pandemic has posed a set of challenges, in particular the transition of classes and cultural activities to an online format. We are very happy with the prospect of being able to return to face-to-face activities this year. Unicamp’s campuses will be able to once again host meetings aimed at learning about Chinese language and culture”, he pointed out.

De Conti highlighted, among the activities carried out in 2021, the launch of the series Classics of Chinese Literature, the result of a partnership between the Institute and Unicamp’s Publishing House. The first volume, “Picking up the Flowers Bloomed in the Morning at Sunset”, by Chinese writer Lu Xun, brings together ten prose texts written in 1926, translated into Portuguese for the first time, in a bilingual edition. The second volume, “Four Chinese Popular Legends,” is expected to be released this year.

As an invitation of CPFL Institute in Campinas, Bruno de Conti curated the series “Olhares sobre a Literatura e Cinema da China” (“Perspectives on Chinese Literature and Cinema”) at Café Expresso, a version of the traditional philosophical TV program Café Filosófico, which included the participation of Francisco Foot Hardman (Language Institute at Unicamp) and Cecília Mello (Communication and Arts School at USP). The year also featured a set of online cultural activities, which marked traditional dates in China, such as the Chinese New Year and the Mid-Autumn Festival.

The Mandarin courses, on the other hand, gained scope with the transition to the online format, reaching a record number of students in 2021. “There were almost 500 students, mainly from Unicamp, but with people from all over Brazil”, said De Conti. According to him, even with the return of on site teaching in the second semester, some classes should be kept in the online format.

Another success has been the course “Introduction to Chinese Society and Culture” (AM 077), offered by Professor Gao Qinxiang. Multidisciplinary and open to the entire community of Unicamp, the subject is offered in the 1st semester of each year and, in 2022, has about 40 students, revealing a significant increase in demand over time.

Besides the praises from both sides to Confucius Institute at Unicamp’s job over 2021, at the end of the Council meeting, the authorities highlighted their commitment to continuing the ongoing academic cooperation between Unicamp and BJTU. Mutual invitations from both sides, Brazilian and Chinese, have been made so that scholar delegations can visit each other in the following years. The overall outcome of the meeting was very positive, as new and exciting cooperation activities have been settled for the years to come. 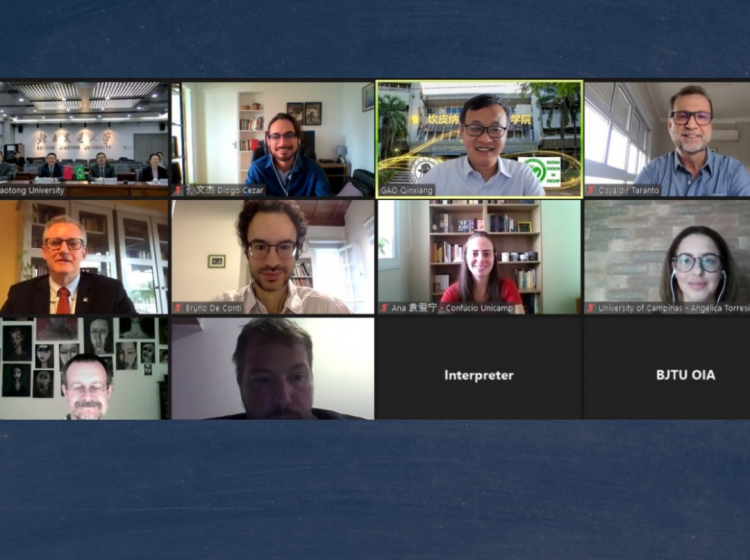